No miniatures or terrain today, but some pictures. Don't worry, still made by me.

The hook horror is a classic D&D monster from the Underdark. It's an ogre-sizes bird-cockroach beast with hook for arms. It's pretty cool looking, but in the end it's nothing special, there are lot of better monsters to fight.
Still, I think it's a well design monster with a lot of potential, it's a shame it only lives underground.

I mostly play d&d 3.5 and Pathfinder, but here some flavour and some suggestions if you want to give some real stats to these guys.
The first design is the classic hook horror, but I think it can also works for: 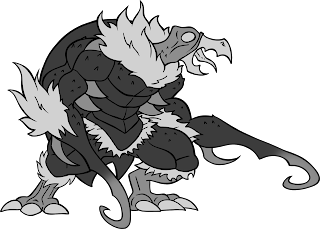 Ice hook:
this hook horror specie lives on top of mountains and glaciers. It's bigger then the usual hook horrors and adapted to live in cold environments. Unlike the most common Underdark species, this variant does not feel any pain from sunlight. The chitin of and Ice Hook is strong as steel and, unlike the other species, it is exclusively carnivorous.
Variation to the stats. As standard Hook Horror but:
- no light sensitivity
- cold subtype
- bonus to hide in cold environments instead of Underdark areas 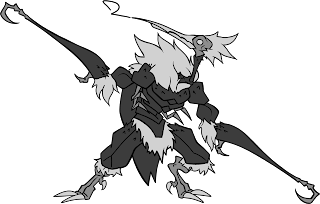 Wood hook:
also known as needle horror, this specie is a little smaller then a man,  but its vicious claws can strike enemies from distance with amazing speed. The needle horror lives in dense forests and rarely touches the ground. It's the most pacific of the known species, but it is very territorial. It is extremely adapted to the environment, possessing unique traits from the other species; it lacks a strong beak, but it posses a long prehensile tongue, the vestigial arms on the sides actually are used to scrape wood in search for insects and fruits. The long feather-like fibres help the creature camouflage in the foliage and they actually change colors during seasons.

Variation to the stats. As standard Hook Horror but:
- no light sensitivity
- no blind sight
- low-light vision
- medium size (and related changes to the stats: +2 dex, -4 for, +1 AC)
- talents more suited to hit a lot and disarm instead of breaking stuff
- no bite attack
- a tongue attack
- reach
- bonus to hide in forest environments instead of Underdark areas
- they speak Sylvan (or at least understand it) instead of Undercommon 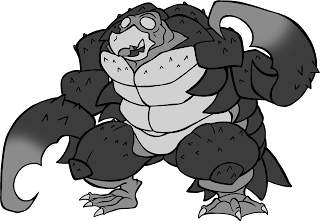 Sea hook:
also know as fish hooks, crab horror and boat ripper, this specie lacks the climbing abilities of its cousins in exchange for powerful webbed feet and the ability to hold breath for almost two hours. It's the bigger variant of hook horror and it is built to only a purpose: crush. Shells, bones, boats: nothing can resist its pincher or the powerful beak. Still, its diet is almost all made of molluscs.
Variation to the stats. As standard Hook Horror but:
- no climbing speed
- swimming speed
- amphibious subtype
- they speak Aquan (or at least understand it) instead of Undercommon

What do you think, do you want to see some more stuff like this in the future? I should color them? Let me know.
at June 27, 2018 No comments:

The Brave
I'm Emiliano, an italian designer and illustrator with a passion for roleplay, tabletop and videogames. I had my share of battles in the past with my Warhammer orcs and Confrontation wolfens but I stopped the hobby before my college years. Recently I'm back in the game, at least for roleplaying purposes. I paint old miniatures and mix cheap toys in creative ways to have unique creatures to kill my players with on d&d nights or simply because I can.